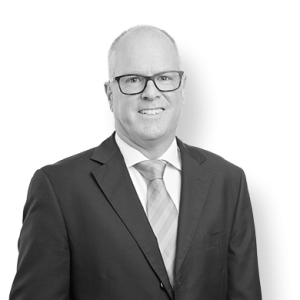 With more than 25 years’ experience, Tim’s career has involved acting in a wide range of commercial business disputes where he has gained experience as an advocate and developed strong strategic and communication skills.

From 2001-2006 Tim was partner in a litigation consultancy practice which served a client base (mainly via small or commercial law firms), requiring dedicated litigation support with Tim typically taking on responsibility for “getting up” cases for trial, either alone, or on larger matters, as part of a team, including all aspects of preparing detailed witness statements, liason with expert witnesses, compilation and analysis of documentary evidence, formulating case strategies, and instructing and assisting counsel.

This consultancy included long-term project work in relation to two multi-million dollar mine construction and development contract disputes, one privately arbitrated (construction of laterite nickel processing plant), the other (construction of underground zinc mine) litigated in the WA Supreme Court.

For 6 years prior to joining Culshaw Miller Lawyers, Tim worked firstly as a consultant, and later Principal, at dedicated litigation-only practice, Maxim Litigation Consultants, where he had conduct of a wide variety of commercial litigation matters, primarily in the Superior Courts and Private Arbitrations, including performance and payment disputes under land development and sale contracts, construction contracts, disputed mining joint venture entitlements, arbitration of a multi-million dollar ship building contract, negligence claims involving both architects and engineers, and disputes concerning alleged breaches of (or misleading and deceptive conduct in relation to) various business contracts including retail franchise and business sale agreements.

From 2008 to 2010, Tim was instructing solicitor to Chris Zelestis QC at the trial and subsequent appeal to the WA Court of Appeal in the matter of Western Areas vs Streeter, a $60 million case involving issues of director’s fiduciary duties and diversion of corporate opportunities in relation to a proposed nickel exploration project.

In December 2011 Tim appeared as junior counsel with Chris Zelestis QC in the High Court, successfully opposing an application for special leave in the Streeter case.

Since joining Culshaw Miller, Tim has continued his general commercial litigation practice, and has also expanded his role by providing litigation support (including as counsel) to our Wills & Estates team and in particular acting in relation to contested wills and estate matters, and Family Provision Act claims.

Between 2015-2018 Tim played a key role on behalf of defendant beneficiaries in achieving a negotiated settlement of parts of a complex family dispute, and various associated litigation, concerning the multi-billion dollar estate of the late Len Buckeridge.